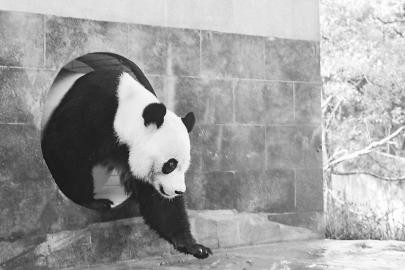 On December 30, the giant panda "Bebe" who returned from the United States met with the public and officially opened a new life in Bifengxia, Ya'an. Photo by Huang Gang (Visual Sichuan)

Newspaper (Reporter Wang Fei Wang Chengdong) After returning home for more than a month, can "Babe" adapt to life in his hometown? On the morning of December 30, the giant panda "Bebe" who returned from the United States officially closed the quarantine and met the public at the Yafeng Bifengxia Base of the China Giant Panda Protection and Research Center. "Bei Bei" gained 116 kilograms, which was 3 kilograms heavier than when he returned home.

After a short welcoming ceremony, "Bebe" officially moved into the returnee panda park at Bifengxia Base. Maybe when he first arrived in the new environment, "Bei Bei" was a little shy and curious, walking around his new home, looking east and west, climbing trees and eating bamboo. The breeder introduced that "Bei Bei" was already familiar with the language of his hometown and fell in love with the food in his hometown. "A change in weight can explain all this."

"Bei Bei", male, born in 2015, is the third child of the pandas Mei Xiang and Tian Tian who began to travel to the United States in 2000. According to the agreement between China and the United States, pandas born in the United States must return to China at the age of four. On November 21, after a long trek, the giant panda "Bei Bei" arrived at Bifengxia Base. By convention, all pandas returning from abroad must undergo quarantine and quarantine for about a month to determine their physical condition and adapt to their diet and breeders in their hometown.