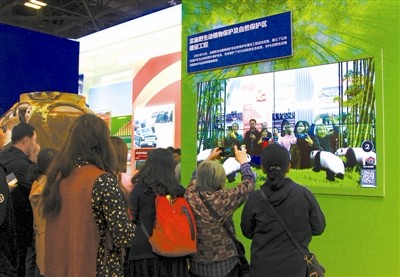 "Great journey, brilliant achievements-a large-scale achievement exhibition celebrating the 70th anniversary of the founding of the People's Republic of China" is being held in the Beijing Exhibition Hall. Walking through the progress hall, as if through a 70-year time tunnel. The first forestry construction policy, the first nature reserve, the first ecological project ... The diversified display of forest and grass elements frequently appeared in the exhibition, telling a vivid story of the construction of forest and grass ecological civilization since the founding of New China.

The exhibition takes the chronicle as the main line of time, and every 10 years is a display unit. It shows the 70-year glorious history of the founding of New China by connecting major historical events and major achievements. Among them, the forestry and grassland display content runs through all 7 exhibition areas, and presents the 70-year course of China's forestry and grass industry through 23 display points, 36 pictures, 15 videos, and 3 groups of themed exhibition walls (modeling).

Forestry first appeared in 1950. This year, the forestry construction policy of “general forest protection, key afforestation, reasonable harvesting and utilization” was established, which played a guiding role in forestry construction and development in the early days of the founding of New China. Subsequently, the state successively developed and constructed state-owned forest areas such as Xing'anling in the northeast, and successively established 135 state-owned forest industry enterprises, providing a large number of timber and forest products for the country's construction, and making important contributions to the restoration and development of the national economy.

Major historical events and major construction achievements in the development of the forest and grass cause were presented in the exhibition. In March 1956, Chairman Mao Zedong's call for "greening the motherland" set off a nationwide upsurge in tree planting. The first nature reserve was established in Dinghushan, Guangdong in 1956, the first national forest park was established in Zhangjiajie in 1982, and the first international cooperation in giant panda conservation was launched in 1994 ... These "firsts" recorded the development of nature conservation in China . The Three-North Shelterbelt Project was launched in 1978, the Natural Forest Protection Project was launched in 1998, the Project of Returning Farmland to Forests, and the Beijing-Tianjin Wind Sand Source Control Project were launched in 2000. Major ecological projects comprehensively demonstrate the efforts and practices of ecological restoration in China through comparison of photos and videos. The grassland contract responsibility system was introduced in 1985, the reform of the collective forest tenure system was initiated in 2008, and the reform of state-owned forest farms in state-owned forest areas was initiated in 2015 ... A series of forest and grass reforms have pushed China's forest and grass cause to a new stage.

In the exhibition, the application of a large number of pictures and videos has enhanced the transmission effect of the forest grass mark, and digital communication methods such as multimedia AR have enriched the exhibition form. On the theme wall of the Green Water and Green Mountain, the sandbox of the theme “Reform and Development of State-owned Forest Areas” presented a new look of the transformation and development of state-owned forest areas. Before the "AR Interactive Screen for Rare Wildlife Protection", viewers can interact with 6 kinds of rare wild animals such as giant pandas, Siberian tigers, and golden monkeys on the big screen. The three sets of forestry and grassland themed exhibition walls (modeling) such as the "Saihanba themed exhibition wall", "the panda protection landscape modeling", and the "National Park System Pilot Gallery" are highlights of forestry and grass work, and are also hot spots of public attention. Take a photo of this.

In each exhibition area, there is a wall of heroes, which records the role models of the times and inherits the spirit of immortality. From a logging hero to a tree planting model, Ma Yongshun, Yang Shanzhou, who took root in the mountains and planted trees after his retirement, Wang Youde, a sand control hero who has been fighting for 40 years to achieve green progress and desertion, has died to protect Tibetan antelopes and poachers. Nandajie ... A forest grass hero displayed on the hero's wall is not only the pride of the forest grass system but also the eternal spiritual monument of the forest grass people.

"Great Process, Brilliant Achievements-A Large-scale Achievement Exhibition Celebrating the 70th Anniversary of the Founding of the People's Republic of China" Since its official opening on September 25, domestic and foreign audiences who come to visit every day have been endless.